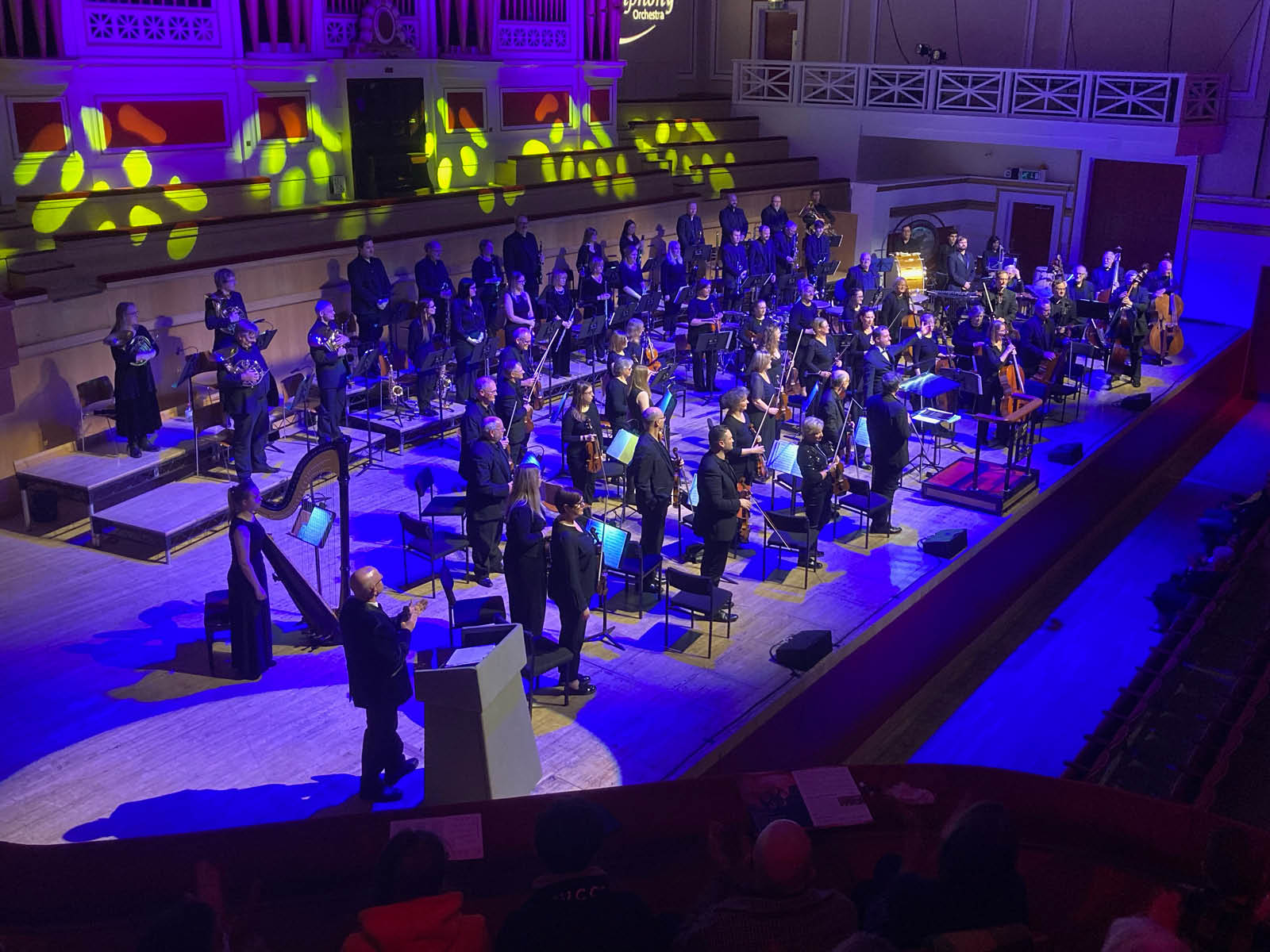 What a show! Thank you to everyone who braved the elements to attend a sparkling concert of music from Stage and Screen on Sunday.

From the start there was a festive atmosphere. The audience, quite a number of first time concert-goers, waiting for covid passes to be checked in the falling snow before the concert at De Montfort Hall seemed to be enjoying themselves. After the concert, excited young audience members rushed off on to the grass outside hall to make snowballs, making this a really memorable pre-Christmas treat. Faces in the audience lit up and feet tapped as people recognised their favourites from Star Wars to West Side Story and the buzz of excitement continued long afterwards in a string of enthusiastic online messages received by the Orchestra.

It was evident too that the Orchestra were enjoying themselves and Music Director Claus Efland, safely back in Berlin the next day said “it was a great concert and I really enjoyed it, the Orchestra sounded impressive with so many fine musical details”.  The pictures say it all with vivid special lighting adding to the overall effects. 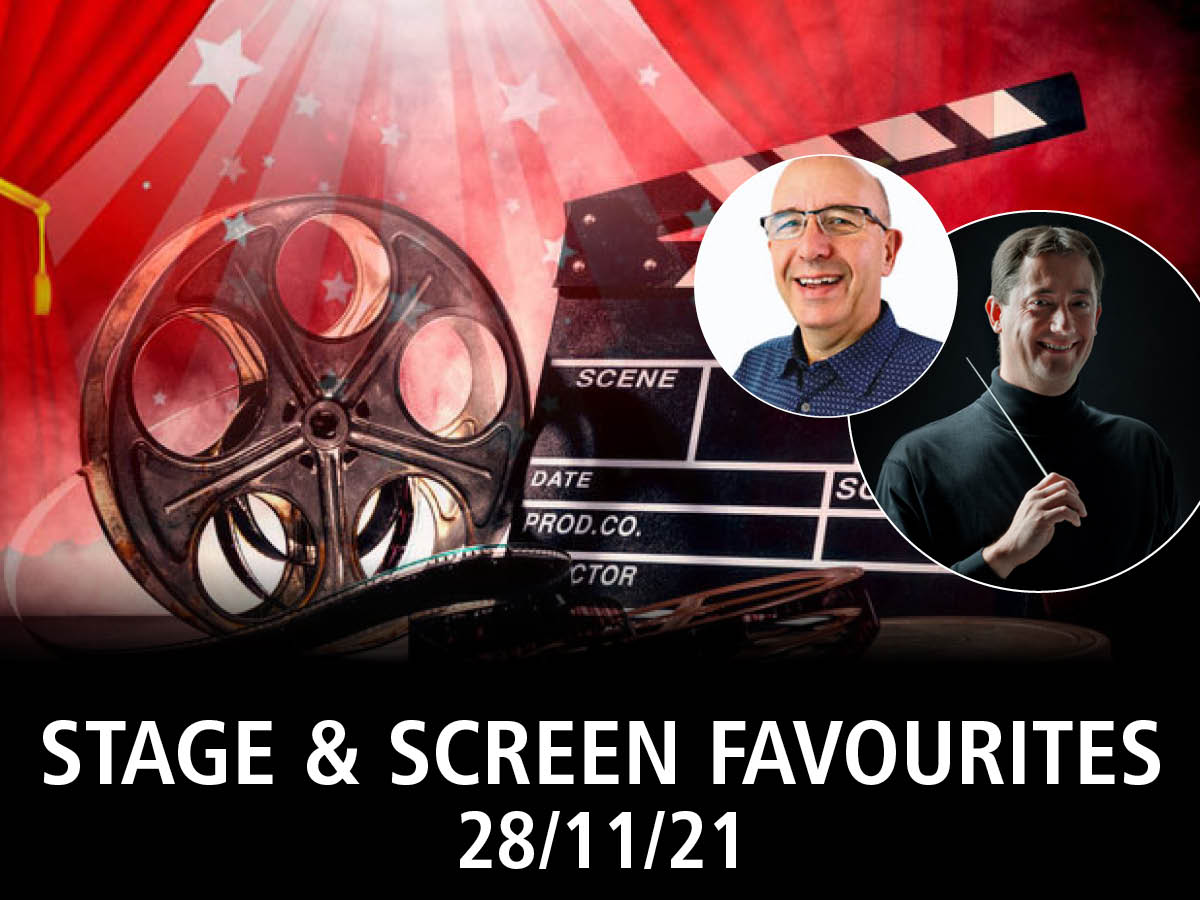 Following the successful 2021-22 season opening concert in October, the Bardi are back on Sunday 28 November with a completely contrasting concert programme featuring music from stage and screen. Judging by the levels of enthusiasm by players and Music Director at Sunday’s rehearsal for the concert it looks set to be a real winter warmer.

The programme opens with the Imperial March from Star Wars followed by other film music from John Williams, and also includes perennial favourites from James Bond films, Pirates of the Caribbean and the iconic Dam Busters March.  Musicals are represented by, amongst others, Les Miserables, The Sound of Music, West Side Story and The Phantom of the Opera. Local entertainment celebrity Martin Ballard will take a break from preparing his lines for the upcoming De Montfort Hall Christmas Pantomime to compere the programme which will be conducted by Bardi’s Musical Director Claus Efland.

Orchestra Manager Robert Calow commented ‘the Orchestra are so enthusiastic about playing this wonderful music for the audience to enjoy as they listen to the West End stage and Big Screen favourites’. 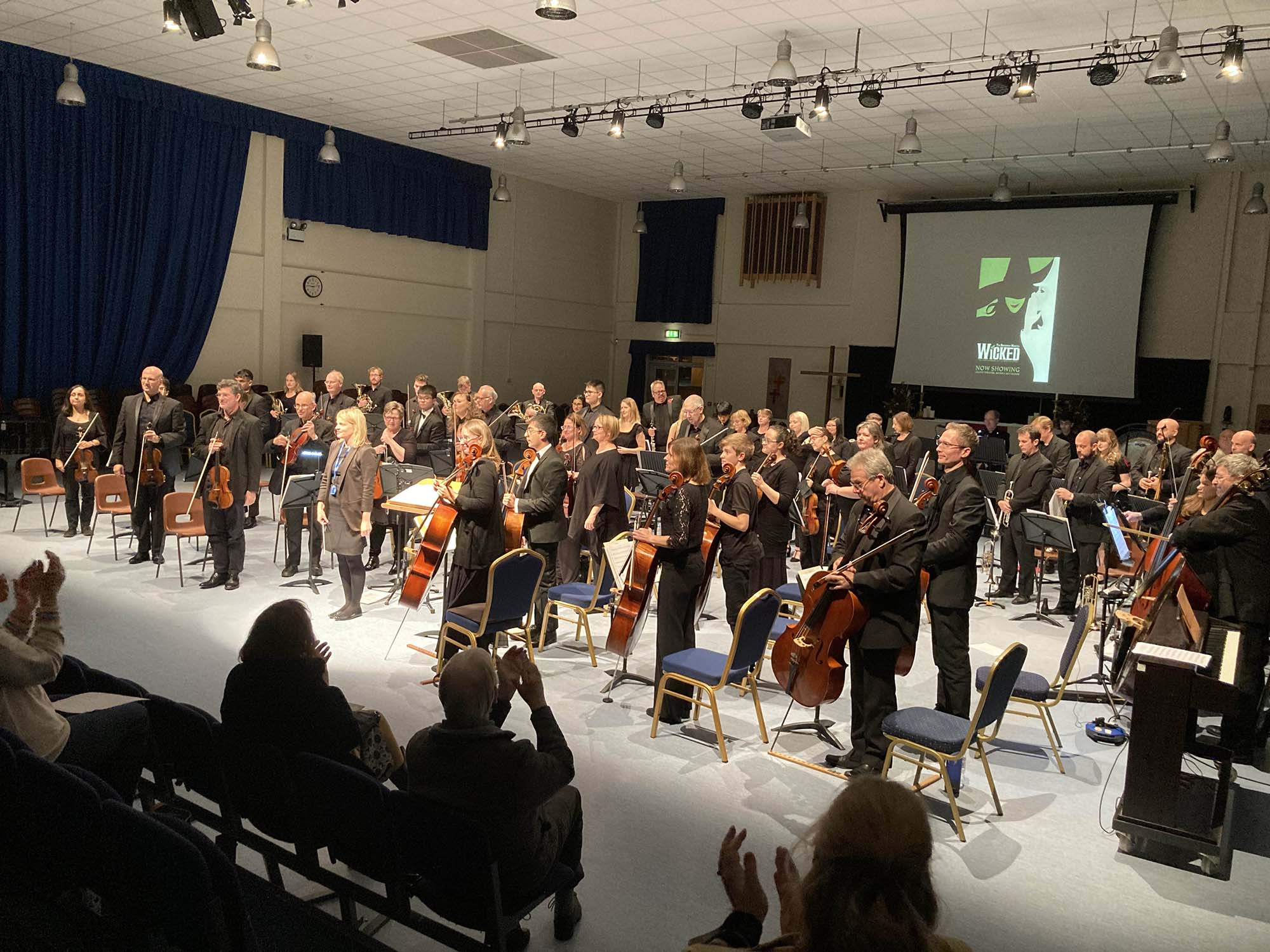 The Bardi Symphony Orchestra joined up with young musicians from partner organisation Leicester Grammar School on Saturday 6 November in an imaginative concert entitled ‘A set works concert’. A sizeable audience made up of parents and a lot of students enjoyed a chronological whistle-stop trip through the history of music from Bach to themes from the 21st century musical Wicked via Haydn and Star Wars!

All the works featured were from the current examination syllabus providing students and parents with an opportunity to hear the pieces live. Players from the Grammar School sat alongside Bardi players and, in turn, accompanied five of their fellow students in movements from five different concertos, with some players even slipping out of the orchestra when it was their turn to play solo. Informative commentary in between each piece guided listeners through some of the intricacies of composition and music history whilst interactive technology enabled listeners to vote on various aspects of the proceedings.

The Bardi has long recognised the importance of initiatives such as this annual concert with young players in helping the players of tomorrow to develop their skills. 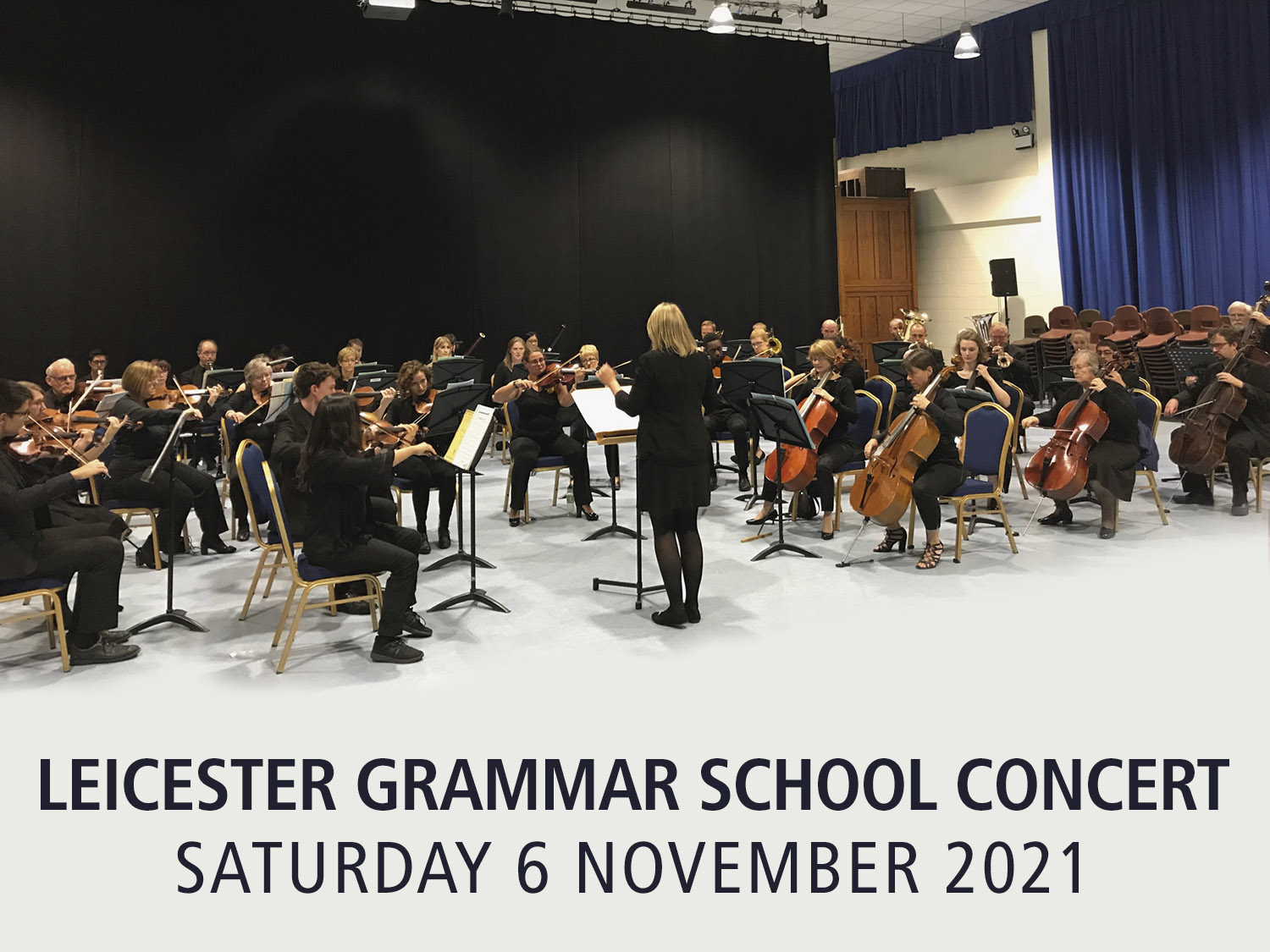 There’s a just a week to go until the Bardi’s annual concert at Leicester Grammar School where the talented pupils get the chance to play with the orchestra! Featuring excerpts from concerto favourites as well as music from Wicked and Star Wars, tickets are FREE, so why not come and meet the next generation of musicians from Leicester 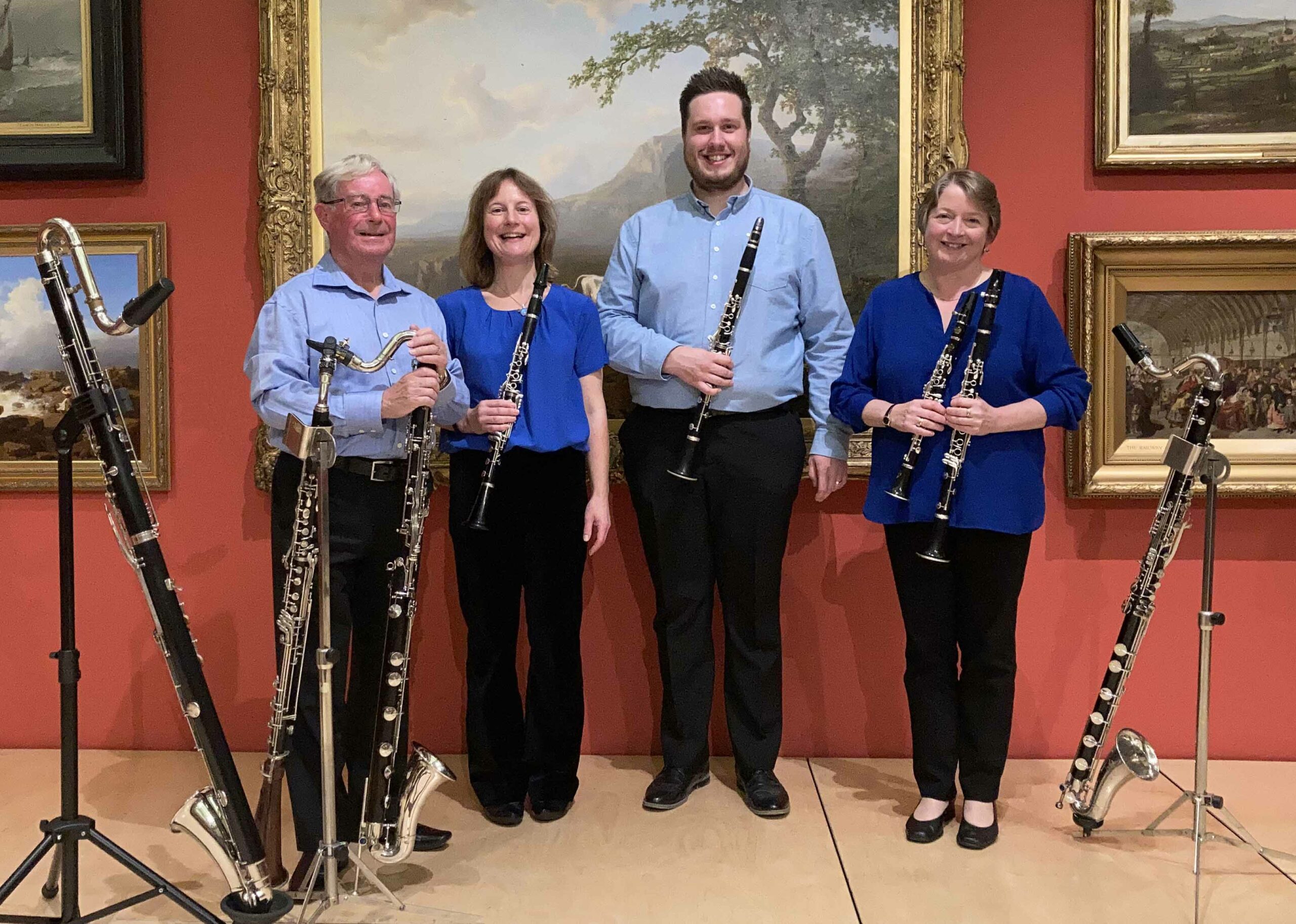 When not on stage at De Montfort Hall, the talented members of the Bardi can be found performing regularly across the county! Members of the clarinet sections of the Bardi Symphony and Wind Orchestras were in action on Monday 4 October 2021. Performing as the Bardi Clarinet Quartet, Christine Taylor, Mark Wilson, Verity Morris and Peter Fielding played at Leicester’s New Walk Museum and Art gallery where they were guests of the Leicester Literary and Philosophical Society, following the 2021 AGM of the Society. The quartet played a wide ranging programme from Mozart and British Folk Songs to Lennon and McCartney.

The recital was introduced by Orchestra Manager Robert Calow, himself a clarinettist but on this occasion in the role of host, who introduced the various musical items and provided some historical background to the Clarinet. Interestingly there were several sizes of Clarinet on show during the performance for the appreciative audience of ‘Lit and Phil’ members who joined in person in the Art Gallery and on Zoom. 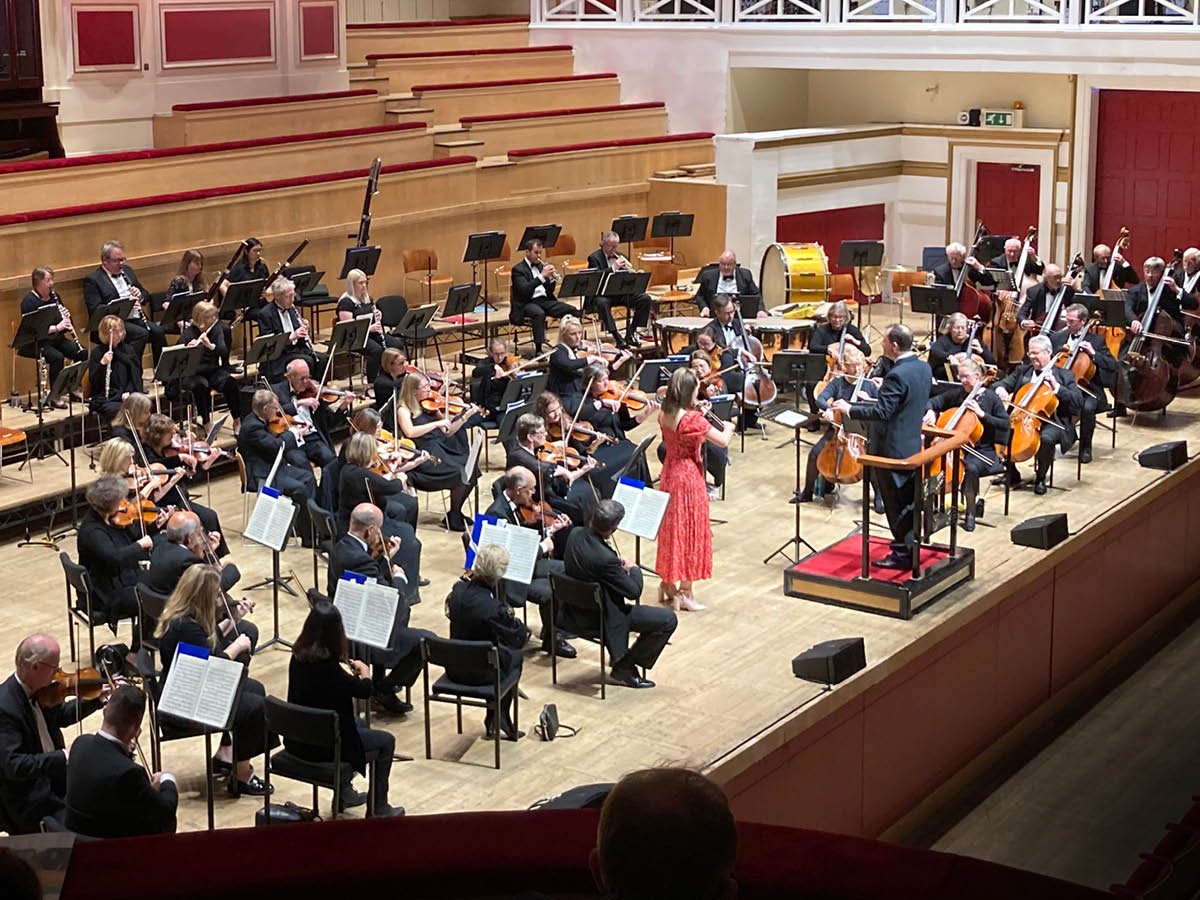 The Bardi really are back!

There was a real buzz of excitement both backstage and front of house on Sunday 10 October when Bardi players and audience were clearly very pleased to be back sharing live music in De Montfort Hall. Covid safety measures put in place by De Montfort Hall were smoothly and unobtrusively conducted and small queues outside in the sunshine added to the slightly festive atmosphere as concertgoers greeted friends they hadn’t seen for a very long time.

The concert was a resounding success with appearances by local soloists not to mention that local celebrity the De Montfort Hall organ which, played by Leicester Cathedral Organist David Cowen, reminded us of just what a powerful instrument it is in Saint-Saëns’s Organ Symphony. The Bardi were delighted to welcome back violinist Amalia Young, a former Bardi Young Musician winner, who gave a memorable performance of the Mendelssohn Violin Concerto in the first half of the concert.

Here’s to the next concert in De Montfort Hall (Sunday 28th November at 3pm for your diary!).

Find out more about the next concert, Stage and Screen Favourites here 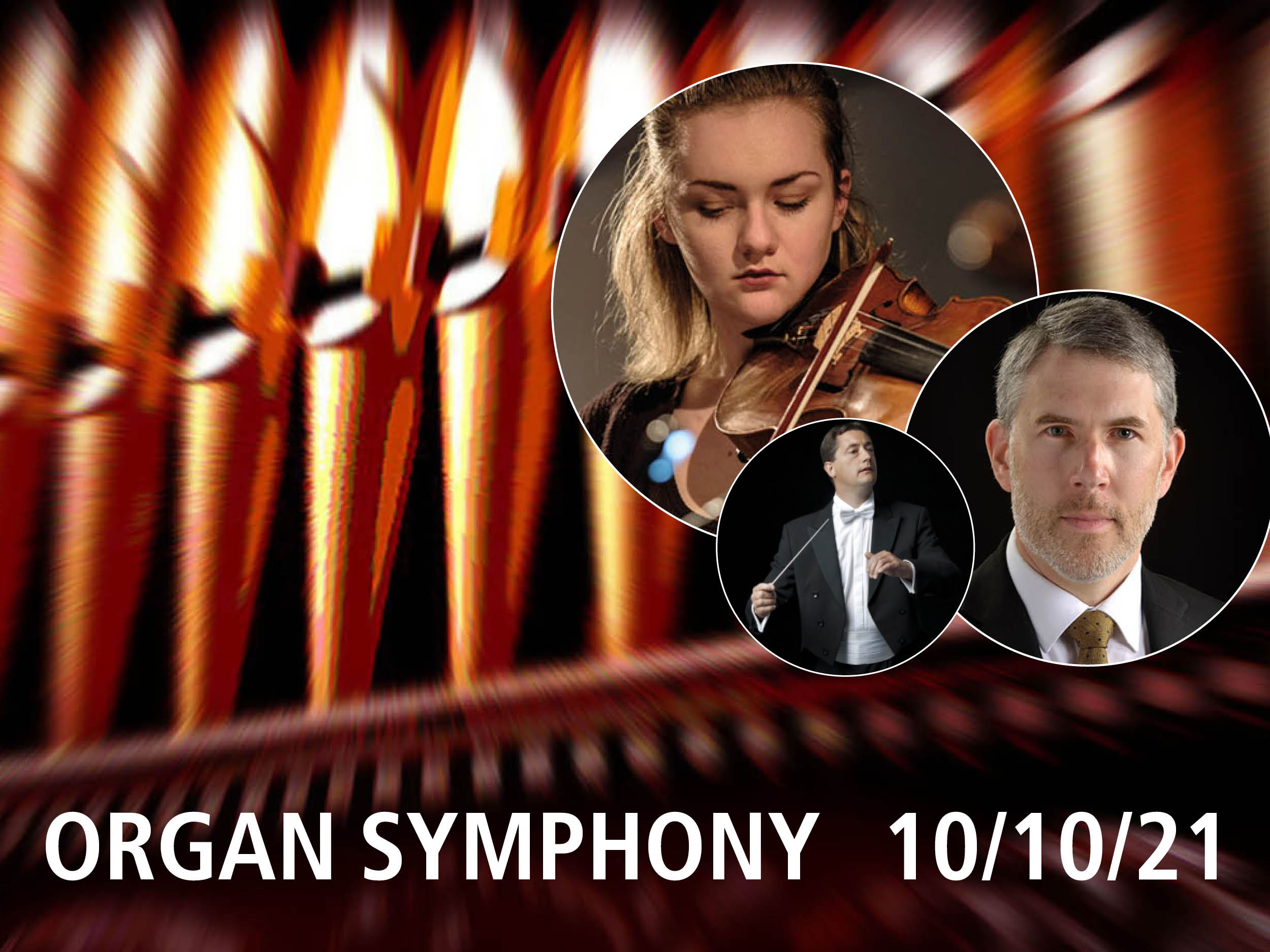 A programme with lots of local interest!

After their long enforced absence from the concert platform, the Bardi Symphony Orchestra, and conductor Claus Efland, are opening the 2021-22 De Montfort Hall season in real style this Sunday with an exciting programme that features lots of local talent!

The concert gets off to a rousing start with Elgar’s arrangement of Bach’s Fantasia and Fugue in C minor before the first half concludes with Mendelssohn’s magnificent Violin Concerto with violinist Amalia Young. Now based between Oxford and London, Amalia was born and received her early education in Leicester continuing her studies at the Royal College of Music and is now undertaking a masters degree at Oxford University. She has performed extensively as a recitalist and chamber musician across London and has also performed in America at the New England Conservatory and in Boston.  Amalia makes a welcome return to playing with the Bardi Symphony Orchestra having made her concerto debut with the Orchestra in 2016 after winning the 2016 Bardi Young Musician Competition.

The renowned De Montfort Hall organ features in Saint Saëns’ ever-popular Organ Symphony in this centenary year of the composer’s death. Playing the organ in the symphony is the Leicester Cathedral Organist and well known local musician David Cowen. David has a varied career as a soloist, accompanist and teacher, he has toured internationally to France, Germany and Japan and made several recordings. He works regularly with choirs, in particular with Leicestershire Chorale, and is also a committed teacher regularly leading classes and workshops, and is currently an Individual Music teacher at Loughborough Schools Foundation. 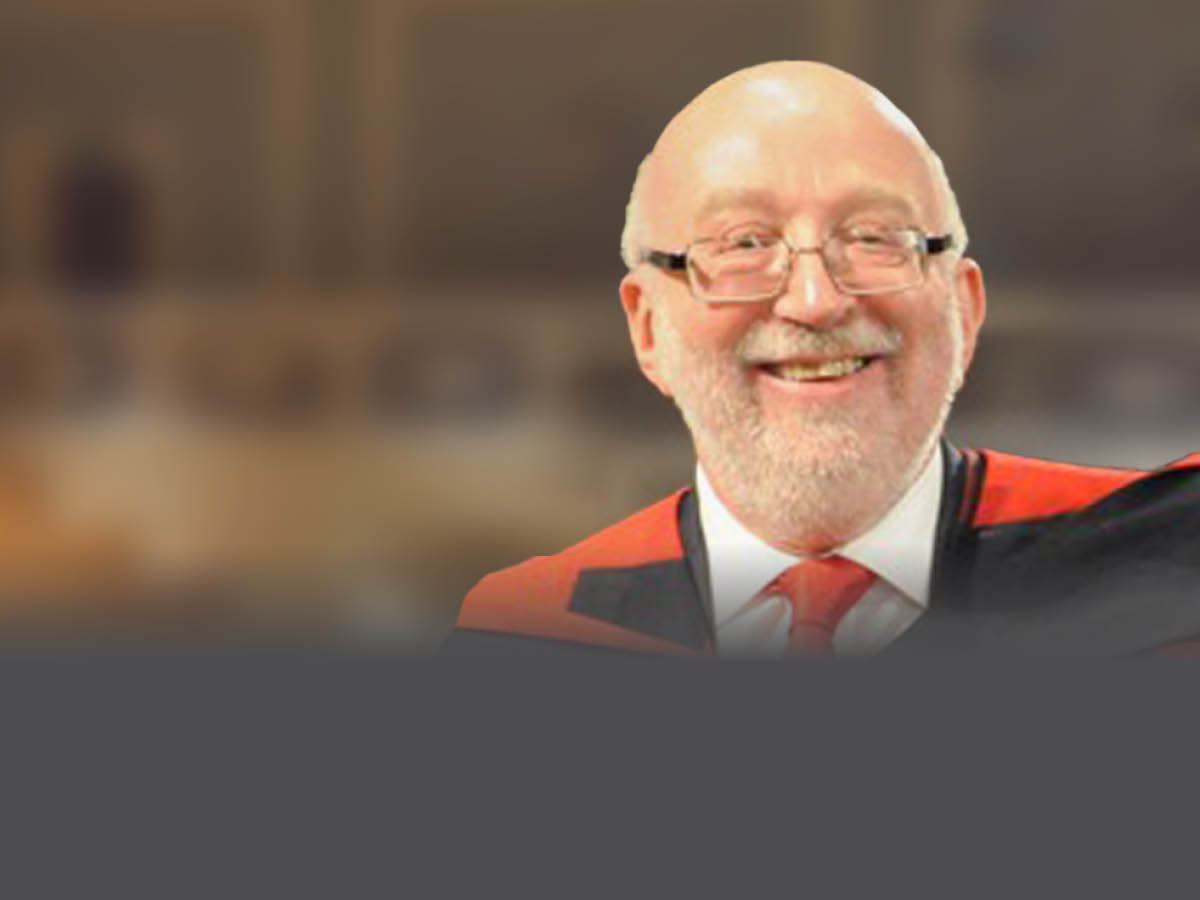 For the sixth and final interview in our series the interviewer becomes the interviewee as the attention turns to Dr John Florance ambassador to the Bardi orchestras. A long-time supporter and friend to the Orchestra, John gives some fascinating insights into his early life, his career in education and latterly work as a BBC broadcaster. A regular for Bardi pre-concert talks at De Montfort Hall, John travelled with the Bardi Orchestra on tours to Russia, Prague and Germany, and the thoughtful selection of photographs and reminiscences brought back happy memories to many Bardi players.

To hear John’s selected pieces you can pause the video and listen to the music in the Spotify player below. Alternatively, click here to watch the video on YouTube where you can find links to all the pieces in the video description.

Watch more in the interview series 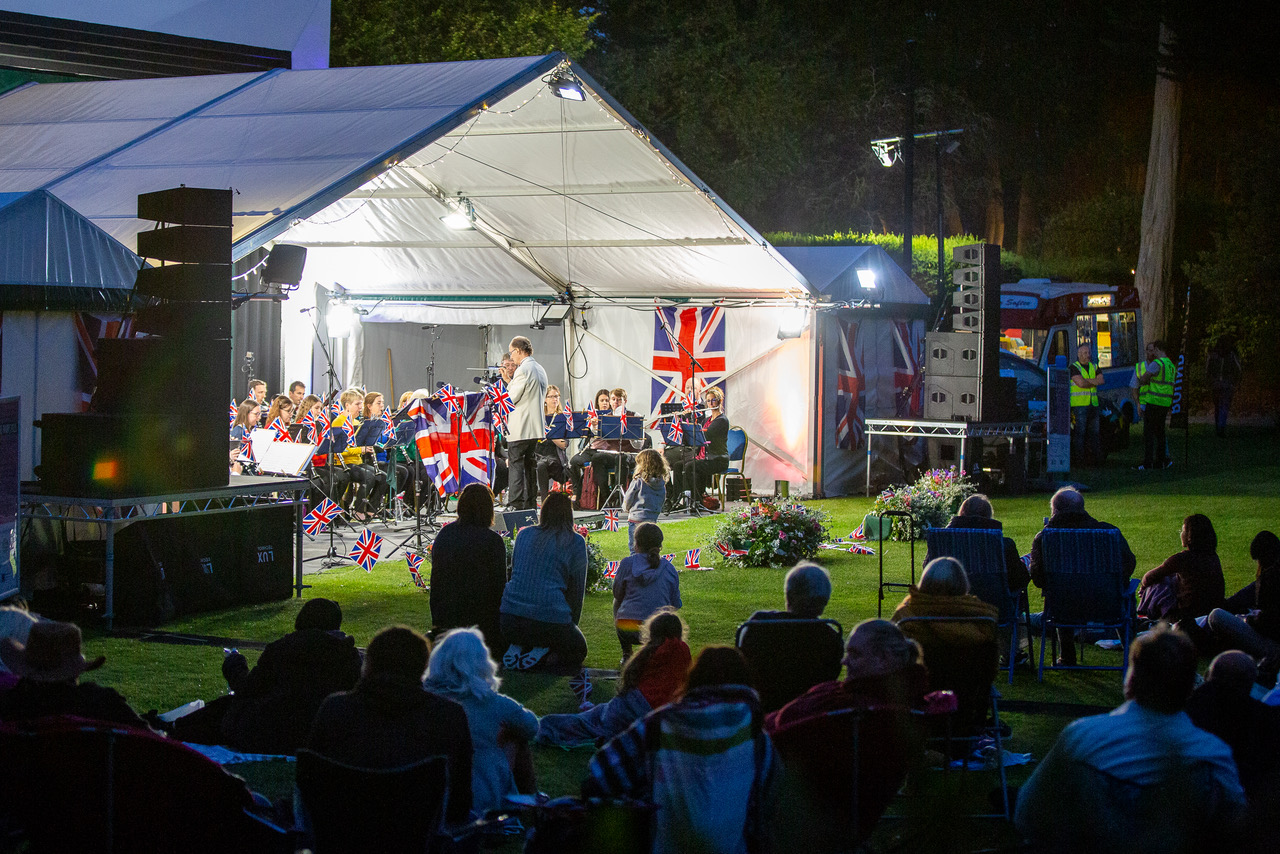 A fine early September Saturday evening saw the Bardi Wind Orchestra make their first concert appearance since December 2019 when they were invited by Hinckley and Bosworth District Council to perform in Hinckley’s Hollycroft Park in a ‘Proms in the Park’ concert. An estimated audience of over 1,000 enjoyed a programme which included a host of popular melodies from stage and screen including Harry Potter, James Bond themes, the Big Country, Frozen and Aladdin. The second half concluded with well known favourites from the Last Night of the Proms which went down well with the flag-waving audience who joined in enthusiastically. BWO were joined for the concert by long-time friends of the Orchestra, singers Jenny Saunders and David Morris and the concert was compered by Colin Blackler, well-known to Hinckley audiences for his appearances at the Concordia Theatre, and a former Chairman of Bardi. 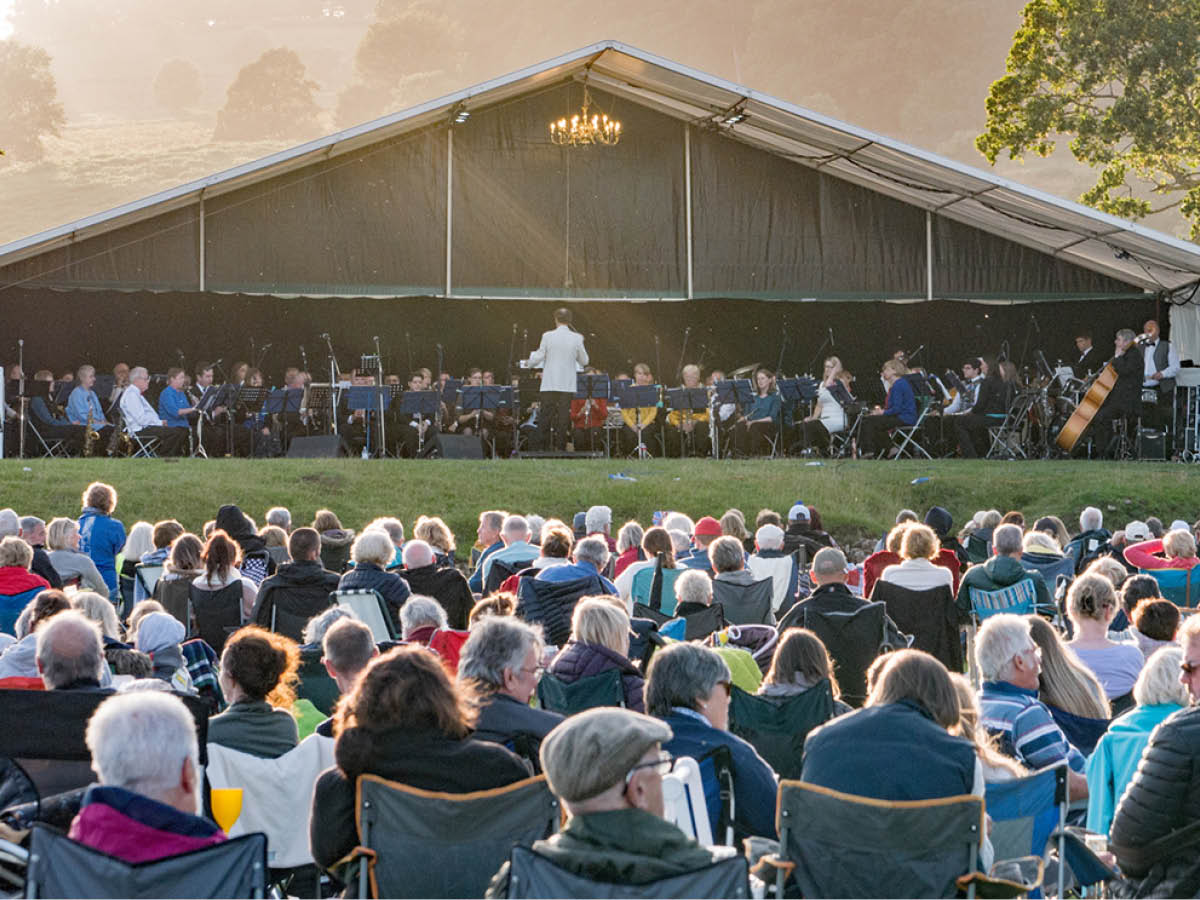 The Bardi Wind Orchestra are delighted to be playing again after 18 months of silence in an open air concert in Hinckley’s Hollycroft Park this coming Saturday. Invited by Hinckley & Bosworth Borough Council to give this special concert, they will be playing a host of upbeat popular favourites from stage and screen for the whole family, including Harry Potter, James Bond, E.T. and all your proms favourites.

Appropriate covid-secure measures will be in place.
Visit hinckley-bosworth.gov.uk/events for more information.